If you are wondering how to make miso (not the soup, but what you need to make the miso soup with) on your own, you are on the right page.

I was on an around-the-world trip with my husband for more than 2 years, making miso soup to who we have met in the world just for fun.

Having shared this story with my friends in Japan, they always ask me this question.
“So do you make miso on your own too?”

Well not yet! We just came back from the trip last year and haven’t had a chance yet. Making miso at each household was a popular thing to do until my grandmother’s generation. Unfortunately today only people who are serious about gastronomy make miso at home.

So here I am, making my own miso for the first time!

We can access to many Japanese blogs and books writing about how to make miso.

The book that I got information from is this. It is in Japanese.

（＊This book is good because everything that the author tells is what she has experienced through making fermented foods. ）

There are 2 steps to make rice miso home. 1: Increase the rice koji, and 2: Ferment the soybeans with the rice koji that you made at the step 1.

You can buy rice koji as much as you need to make the miso. However, I am going to make brown rice koji from a small portion of a packaged white rice koji by adding brown rice.

In Japan, you can buy a pack of koji at a regular super market. I fond some that look ok on Amazon.com.

See all on Amazon.com 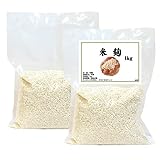 Incidentally, when we say rice koji, like are all these three products listed above, it means that the koji fungus is grown on rice. Miso is always made with soybeans plus some sort of koji, that is grown either on rice, soybeans, or barley. If rice koji is made of the koji fungus that is grown on rice, soybean koji is of soybeans, and barley koji is of barley. The rice koji makes the miso, “rice miso”. Likewise, if the miso is called “Soybean miso”, it is made by soybean koji to ferment the soybeans. Barley miso is made by barley koji to ferment the soybeans. Clear??

Here is a very good explanation by Marukome Miso Company but unfortunately in Japanese.

Step 2 Ferment the Soybeans with the Rice Koji

You are combining the soybeans and the rice koji that you made at the Step 1. In often cases, especially for the first timers, it is easier to buy the packaged rice koji for all what you need than producing rice koji from the starter. Let’s try this though since it is more fun! You can even make brown rice koji from a portion of white rice koji starter too.

＊It should result in about 800g of brown rice koji.

…It already took up about 20 hours to go through all the process and we are not even done yet.  This is a whole weekend project.

This is the end of rice koji making process. It needs about 5 days in total! You are one step closer to make the miso!

Congratulations.This is it for the preparation! Just wait for the fall to come. 😃

For your info
Tomokoji, literally means “friend” koji: It is a method to increase the amount of koji by mixing the starter koji with a grain like rice.

Shiokirikoji, literally means “Salt terminating” koji: It is a method to save the koji by adding salt, so that the further fermentation won’t occur. For example, if you are making miso with 2kg of soybeans, 2kg of koji, and 1kg of salt, then you can mix 1kg of salt into koji now to save, but don’t add any salt in the future when making miso.